WELCOME TO WISCONSIN: THE BADGER STATE 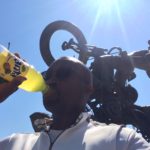 Before ever stepping one foot in Milwaukee, I knew a few things about the state of Wisconsin.

Here’s what I didn’t know. The Harley Davidson Museum is in Milwaukee, Wisconsin. I had to check it out. What a great place. If you are ever in town, do yourself a favor and go say hi.

I would like to leave you with a great quote from one of my favorite actors, who was born in Wisconsin.
Mark Ruffalo.

“I don’t like this idea of Method. I come from that school, but what I was taught was that it’s your imagination. You do your homework, and you use your imagination. People use the Method as a shield; it shields them from being vulnerable. I hear all these young actors who are like, ‘I’m Method, I’m gonna go live in the house, you know, I totally get it, I’ve done it, I’ve been there’, but one thing I know is it kills spontaneity.

They’ll still give great performances, but they’re not playing with the other actors – it’s all about them. And spontaneity and vulnerability are gold on screen and on stage – they are the fucking magic.

When Brando reaches down and picks up that glove and puts it on his hand, that is magic. You can’t plan that.” (He is referring to a scene in On the Waterfront (1954): Eva Marie Saint accidentally dropped a glove on set and, rather than wait for another take, Marlon Brando picked it up and put it on, without missing a line.)