“I like my life alone. I mean, I love being with friends and I love kissing and loving someone to pieces. But it’s hard to find someone who doesn’t ultimately start judging you and your choices. Men like to squash you. I just want someone who’s happy with himself, happy with his life. He doesn’t have to squash mine.”
-Sarah Silverman

New Hampshire is very green and very beautiful. If you ever have time for a nice little vacation and want some serious peace and quiet, come here (in addition to Maine and Vermont).

Side note: I’ve seen more Volvos in Massachusetts, New Hampshire and Maine than any other states I’ve visited. What’s up with that?

Driving from New Hampshire to Vermont was 100% eye candy. I can’t stress that enough. It feels a little bit like driving through Tennessee and Arkansas but even better.

The funny thing is, if you look at both states next to each other, it looks like a rectangle split diagonally down the middle. Maybe they were related a long time ago and got into a really bad argument. 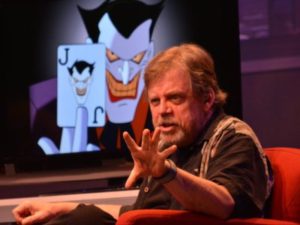 The drive up from Massachusetts to New Hampshire was also beautiful until about 30 minutes before arriving to my hotel. All of sudden, a huge storm of rain fell from the sky and visibility was close to nothing. I made it to my hotel ok and you would think I stayed there, right? Nope.

I had a ticket to go see “Batman: The Killing Joke“ so there I was, back in the storm, driving 17 minutes to see Mark Hamill as the voice of the Joker. He slayed as The Joker and Kevin Conroy was great as the voice of Batman. I love animated features.

The plot behind The Killing Joke animated feature: As Batman hunts for the escaped Joker, the Clown Prince of Crime (Joker) attacks the Gordon family to prove a diabolical point mirroring his own fall into madness.

I enjoyed the movie very much. I didn’t think it was spectacular but everyone did a good job. The sub plot between Batgirl and a misogynistic mobster was great. So was the “romantic” relationship between Batman and Batgirl. I think that I’ve been so used to seeing Batman and Joker go at it, it was nice to see some different plot lines for a change. I hope they keep adding interesting non-Batman/Joker sub plots when they make animated features in the future.

The perfect way to retire for the night before traveling to Vermont the next day, right?