“I really think the creative process is more exciting than ever. There are more and more people doing great work.”
-Ron Howard

The Cherokee Nation is the largest of three Cherokee federally recognized tribes in the United States. It was established in the 20th century and includes people descended from members of the old Cherokee Nation who relocated from the Southeast due to increasing pressure to Indian Territory and Cherokee who were forced to relocate on the Trail of Tears.

The tribe also includes descendants of Cherokee Freedmen and Natchez Nation. Over 299,862 people are enrolled in the Cherokee Nation, with 189,228 living within the state of Oklahoma. According to Bureau of Indian Affairs (BIA) head Larry EchoHawk, the Cherokee Nation is not the historical Cherokee tribe but instead a “successor in interest.”[1]

Like Arkansas, Oklahoma was also a wonderful state to drive through. A lot of beautiful trees as well but not as packed together. Oklahoma started to remind me of driving through Virginia and North Carolina. Two lane highways going opposite ways separated by beautiful patches of green vegetation. 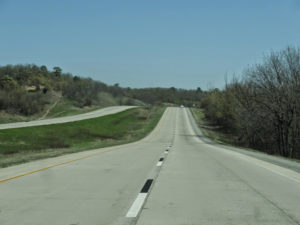 We stopped at the Lockhart Welcome Center along the freeway and I told one of the ladies at the reception desk about my adventure. Her older counterpart next to her startled us with, “Wow!”. I’ve heard this reaction before but she was an older lady and to be honest, I’ve started to expect that younger folks or individuals my age would be startled at what I am doing but I guess that reaction is across the board.

After giving us a brief history lesson about the Cherokee Nation, the receptionist pulled out a map of the United States and I showed her the routes I’ve already traveled and where I plan to go. She was impressed and wished me luck on my adventure. 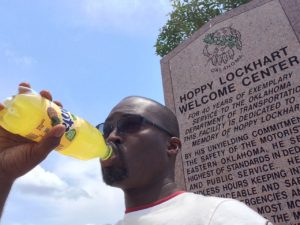 And so, off we went, on over to Texas.